This one is going to be tough to get through. Mr. Sherwood and I have been talking lately about the impact this young man has made on the athletic department since I started working back in the district six years ago.  We agreed this article needed to be written to express our appreciation and gratitude.  So here goes our thank you to Tanner Schmidli.

When I started my first year teaching in the district, I took the 7th-grade boys basketball job.  I had to cut the team down to 12 players.  I needed to make one more cut and it was down to Tanner and a classmate who didn’t have the best situation going on at home.  I had a heart-to-heart conversation with Tanner and told him my last cut was down to he and his classmate.  Exhibiting his selfless nature before I even asked the question, he stated, “He needs to be on the team more than I do.  Put him on the team.” That’s how I came to be known as the coach who cut his own kid from the team.

The next day at work, I relayed that story to former Lady Reds’ basketball coach Marci Quirk.  She mentioned the idea that got all of this rolling.  She stated, “He’s really good at math and you need somebody to keep your book.”.  That was his first “job” helping the athletic department.  He traveled with and was still a part of the team.

The next “job” he procured was thanks to current Lady Reds’ boss John Farrier.  Farrier noted that Tanner had a good voice and should announce our annual junior-high girls’ basketball tournament.  He announced the tournament his 7th-grade year and hasn’t stopped announcing. He’s been the announcer for the Lady Reds’ varsity volleyball and basketball teams for his four years of high school.  He announced his last game for the basketball team last evening against Monroe Central.  What a way to go out.

Along the way, he has helped with volleyball by being a line judge for countless matches and announcing line-ups as well.  He had done the clock for many volleyball and basketball contests.  During track season, he can always be found at Nelson Field helping at the finish line or at various field events.  He also helped me chase geese off of Nelson Field in the middle of the night this past football season as seen in the pic below. 😂😂

One of the traits that Tanner has exhibited that has reflected well on Bellaire is his professionalism.  I have talked to many officials, scorekeepers and coaches from area schools over the years and so many have complimented how Tanner interacts with them and represents the Big Reds.  As long-time Big Red’s coach Ed Miller always likes to say, “I call Tanner the politician.  He greets everybody, shakes their hand and seemingly knows them all.”

I asked the two athletic director’s who have been at Bellaire since Tanner’s arrival their thoughts on the big guy.  Here is their response.

Every school is fortunate to have their die-hard supporters. Bellaire is no exception. Who knew all those years ago when I talked to Kevin Schmidli about doing stats for the football program how much we at Bellaire really had gained. Tanner is a phenomenal example of the spirit, pride and tradition of Bellaire High. From the beginning he was always willing to jump in and help out, from setting up the gym to announcing games to whatever was needed. I look forward to seeing where he goes in life – I know he will be a success whatever he chooses. I certainly appreciate all he did for the athletic department and am proud to know him.

Tanner has been invaluable to me during the last two years.  In addition to announcing volleyball and basketball games, he has among other things, been there to run errands, help set up and tear down for games, serve as a line-judge, ride with me to away games and brighten my day with regular visits to my office.  Despite not participating in athletics, his focus has always been to make the experience better for the athletes and fans of BHS.  I hate to see him go and his presence at the high school will be missed,

On behalf of the Bellaire Athletic Department and I’m sure most of Big Reds’ Nation, I would like to thank Tanner for his many contributions and commitment over the last six years.  I’m not sure how we’re going to do it without you. 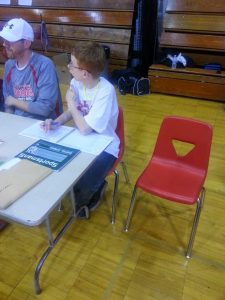 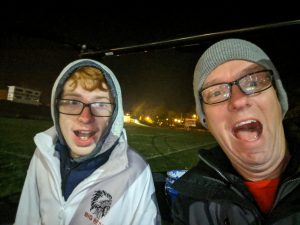