High school students at Bellaire have a myriad of different hobbies outside of school and athletics.  Some like to hang out with friends at the KPL while others like to go shopping along with other various activities.  Senior Big Red’s football player TJ Bell is not your ordinary student.

Sunday afternoon, I saw various social media posts about a fire a few blocks down from my house.  I walked down to the scene to check it out.  I was stunned to see TJ seamlessly working along side his firefighting brothers to put out the fire.  I pulled out my phone and snapped the attached picture.  I then spoke with his mother, Brandi, and she informed me that he has volunteered for over three years between the Bellaire Fire Department and the Spirit of 76 in Key Ridge.  TJ will be taking his fire test in October to become officially certified.

On behalf of the Bellaire Athletic Department and the community in general, thank you to TJ, along with Alexis and Cole, for selflessly giving back to the Bellaire community.  Go Big Reds! 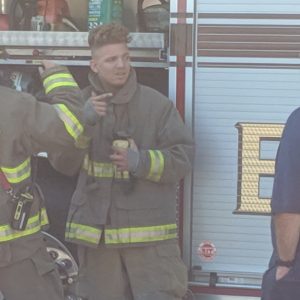